Helping Texas communities recover in the wake of the COVID-19 pandemic takes all of us coming together to support our fellow neighbors. 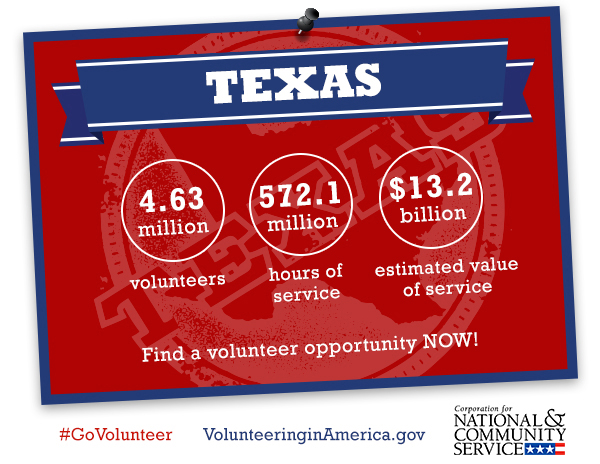 WASHINGTON, D.C. — As the holiday season spotlights acts of kindness and giving back, a new federal study shows that 1 in 4 Americans volunteered through an organization and 3 in 5 helped their neighbors last year.

The annual Volunteering and Civic Life in America www.volunteeringinamerica.gov research, released today by the Corporation for National and Community Service (CNCS) and the National Conference on Citizenship (NCoC), shows that service to others continues to be a priority for millions of Americans.

"We are calling on Americans to volunteer in their communities, and to invite their friends and families to join them," said Wendy Spencer, CEO of the Corporation for National and Community Service. "Volunteers enrich our communities and keep our nation strong. Service also connects us with our neighbors and provides a chance to use our skills for the common good. There are so many ways we can make a difference for those in need, during the holiday season and throughout the entire year."

In addition, more than 138 million Americans (62.5 percent) also engaged in informal volunteering in their communities, helping neighbors with such tasks as watching each other's children, helping with shopping, or house sitting.

"At this time of heightened unease, the civic health of our country and engagement of our citizens is particularly important," said Ilir Zherka, Executive Director of the National Conference on Citizenship. "That's why all sectors of society from nonprofits, to our government, to businesses should redouble their efforts to promote greater connections among Americans. Our civic health is strongest when people trust and help their neighbors and engage with their government."

The research shows that overall rate of volunteering remains strong and stable, despite a slight decrease from the previous year, and that Americans' commitment to volunteering spans across generations. Key highlights of the report include:

The full analysis and customizable data sets can be found at www.volunteeringinamerica.gov

Volunteering and Civic Engagement in Texas

Background on the Report

The data for this report were collected through two supplements to the Current Population Survey (CPS): the Volunteer Supplement and the Civic Engagement Supplement. The CPS is a monthly survey of about 60,000 households (approximately 100,000 adults), conducted by the U.S. Census Bureau on behalf of the Bureau of Labor Statistics. The selected supplements collect data on the volunteering, voting, and civic activities of adults age 16 and older for volunteering and 18 and older for the civic supplement. Volunteers are considered individuals who performed unpaid volunteer activities through or for an organization at any point during the 12-month period (from September 1st of the prior year through the survey week in September of the survey year).