Donate now to support the families and community affected by the tragedy at Robb Elementary School.  All donations will be held locally at First State Bank of Uvalde through the Robb School Memorial Fund. LEARN MORE > 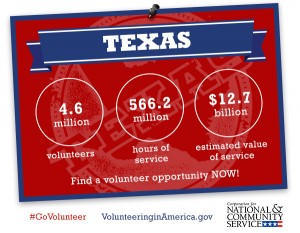 WASHINGTON, D.C. — As America enters the holiday season searching for unity at a time of division, a new federal study shows that volunteer service is a core American value that can help build bridges among Americans. The annual Volunteering and Civic Life in America (VCLA) research study, released on November 15, 2016 by the Corporation for National and Community Service (CNCS) shows 1 in 4 Americans volunteered through an organization and nearly two-thirds helped their neighbors last year, demonstrating that service to others continues to be a priority for millions of Americans.

This year’s report found that 62.6 million adults (24.9 percent) volunteered through an organization last year. Altogether, Americans volunteered nearly 7.8 billion hours in 2015, worth an estimated $184 billion, based on the Independent Sector’s estimate of the average value of a volunteer hour. The volunteer rate consistently remains stable and strong. Over the past 14 years, Americans have volunteered 113 billion hours, service worth an estimated $2.3 trillion. In addition, more than 138 million Americans (62.5 percent) also engaged in informal volunteering in their communities, helping neighbors with such tasks as watching each other’s children, helping with shopping, or house sitting.

Texas-specific report highlights include the following:

Nationwide, the research shows that the overall rate of volunteering remains strong and stable, despite a slight decrease from the previous year, and that Americans’ commitment to volunteering spans across generations.  Key highlights of the report include:

"When we stand shoulder to shoulder to serve with others, we gain another perspective on the lives we share, while using our time and talents to build a stronger nation," said Wendy Spencer, CEO of the Corporation for National and Community Service.  "Each year, millions of Americans do extraordinary things as volunteers; this is America at its best. As we enter the holiday season, we are calling on all citizens to unite in service as a way to unify our country and keep our communities strong.”The Volunteering and Civic Life in America research also shows that volunteers are more likely than non-volunteers to talk to neighbors, attend community meetings, participate in civic organizations, discuss politics or local issues with family and friends, do favors for neighbors, and fix things in the neighborhood. A growing body of research indicates that communities with higher levels of civic engagement have been linked to lower crime rates, improved health outcomes for aging adults, lower rates of mental illness, improved academic outcomes for children, improved employment outcomes for job seekers, and greater community resilience following a disaster.

In 2013, CNCS released Volunteering as a Pathway to Employment, research which found that unemployed individuals who volunteer have 27 percent higher odds of finding employment at the end of a year than non-volunteers.  Among rural volunteers and volunteers without a high school diploma, the likelihood increases to 55 and 51 percent, respectively.

Volunteers provide critical support to our nation's nonprofit, civic, and faith-based organizations, offering time, skills, and monetary support.  The Volunteering and Civic Life in America research found that volunteers are almost twice as likely to donate to charity as non-volunteers. Nearly 80 percent of volunteers donated to charity, compared to 40 percent of non-volunteers.  Overall, half of all citizens (50.5 percent) donated at least $25 to charity in 2015.

As the federal agency for service and volunteering, CNCS funds the annual research to provide government and nonprofit leaders with in-depth information on volunteering and civic trends to help them develop strategies to mobilize more Americans to address local needs through service. The Volunteering and Civic Life in America data includes profiles for all 50 states and the District of Columbia, 51 metropolitan areas, and 75 mid-sized cities, including data on volunteer rates, civic indicators, rankings, area-specific trends, and analysis.

The research is part of the agency’s efforts to expand the impact of America’s volunteers on key challenges facing the nation. CNCS provides critical support to America’s nonprofit and voluntary sector through grants, training, research, and partnerships. Last year, CNCS engaged millions of Americans in service through AmeriCorps, Senior Corps, MLK Day, and other service programs.

The full analysis and customizable data sets can be found at volunteeringinamerica.gov. Americans interested in finding local volunteer opportunities can visit www.serve.gov.

Click here to view the full Infographic with national trends.